This movie is so good, I've already seen it twice.  Jamie Rich let me tag along to an advance screening in 3D, and I saw it again on Friday in 2D.  I have to say, though I prefer 2D, this was the best use of 3D I've seen yet.  It was integrated flawlessly into the film and didn't pull me out of the movie.  Without further ado, let's get to some spoiler-filled reaction comics! 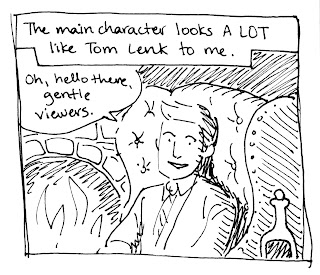 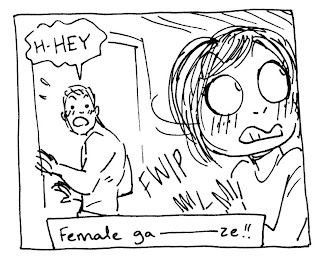 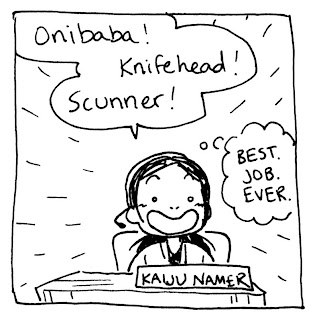 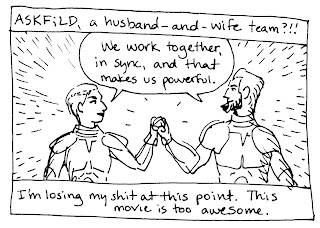 So actually, I don't think it's stated in the film that they're married, but I found it on the film's wiki Monday night while I was fresh out of the screening and wanting more Pacific Rim, like, immediately. 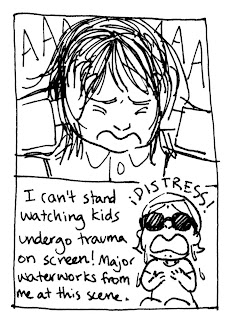 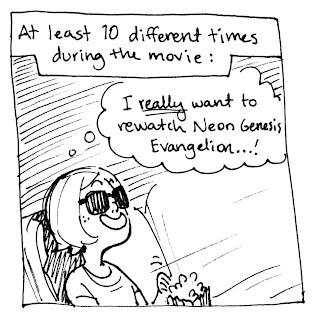 Guillermo del Toro may not have been influenced by Evangelion, but members of his staff CLEARLY were.  The similarities were all over the place. 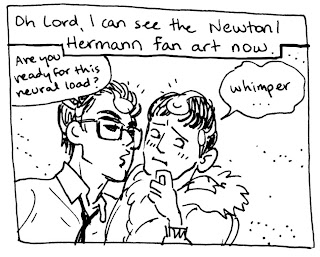 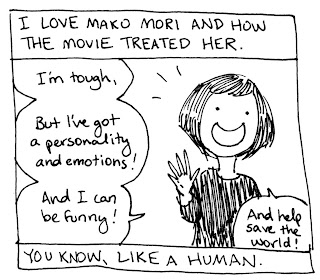 I've spoken with ladyfriends who feel differently, but I was totally pleased with this female lead.  When you compare her to Raleigh, I think she's even more fleshed out than our main-main character.  You know her motivations and they make sense.  She has relationships to other characters, but she has an identity without them as well.  I REALLY liked the humor she was allowed, and the expressions on her face in scenes like when Raleigh suggests that she step into the ring.  It felt totally human and real.  Not everything she did had to be attractive or cool or demure or whatever.  She could be silly and she could reproach the main character.  There was SOME objectification, but come on, she wasn't in a pink suit with cut-outs and body oil.  She also wasn't the one we saw shirtless when she didn't know we were watching.

Also, while I acknowledge that my standards have been lowered by 25 years' exposure to misogynistic media, I loooved the inclusion of lady extras in roles like the televised U.N. meeting, the screens of world leaders talking to Stacker, the propaganda footage of building the jaegers, the interior of the shatterdome, Hannibal Chau's thugs, and the kaiju bunker.  Every one I saw made me smile and feel included.  No eye candy, no prostitutes, no prizes to be won, no damsels in distress.  Just lady-people everywhere!!!  More speaking roles would have been nice, but... *throws up hands*

It's kind of incredible that a movie like this, which seems to really be trying to be inclusive, could fail the Bechdel Test, but alas, it does, largely due to there not being many speaking ladies.  However, it passes the variant of the Bechdel Test which requires two named people of color to discuss something other than a white person, and that was exciting and wonderful.  Stacker and Mako were great characters and I loved seeing them get screen time and character development in the movie. 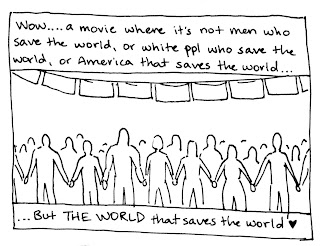 I love love LOVED the multiculturalism in this movie.  Virtually all of the main characters spoke multiple languages, and characters showed respect for one another by speaking in one another's languages.  I particularly liked the scene with Mako powering the arm phaser/cannon thing inside the shatterdome, where Tendo shouts the evacuation order in Chinese (to well-cast extras who I would actually believe were Chinese).  The idea that people from so many countries are working together is really exciting and fun to see.  I want to believe in a 2025 where people get along like that.

....But, it was kind of hilarious that Mako and Raleigh could never seem to pronounce each other's names. xD

Special highlight for me: Stacker's motivational speech scene.  So great.
1) Acknowledges dead main characters, which is weirdly rare in movies
2) Says "man or woman" instead of just "man"
3) Says, "we have chosen to believe in one another" ❤❤

The whole movie just had some really lovely underlying messages.  Humans are at our most powerful when we cooperate, trust one another, and allow ourselves to be vulnerable with each other.  Families come in all shapes and sizes.  Giant robots are rad. 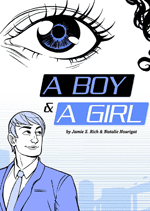